The geopolitical impact of Brexit 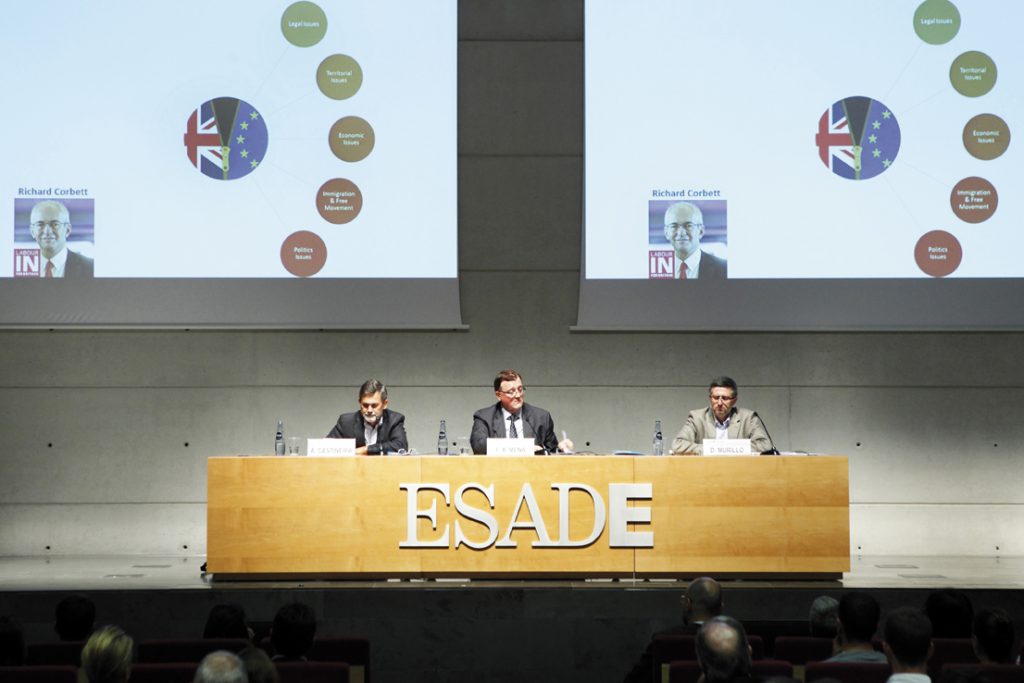 In the long history of building the European Union, the impact of Brexit (Britain + exit) (if it should come to pass) will not be a fissure but rather a geopolitical rupture of the highest magnitude, comparable in recent history to the fall of the Berlin Wall and the collapse of the Soviet Union, the 11 September attacks, and the economic-financial crisis caused by sub-prime mortgages which brought down Lehman Brothers in the United States, along with three hundred other investment banks.

Last November 3rd the Supreme Court of the United Kingdom ruled that it is the Parliament which must decide whether to initiate the process to leave the European Union. This means that the government cannot activate Article 50 of the Lisbon Treaty allowing it to withdraw from the EU on its own. This procedural inconvenience, if confirmed, could be a serious setback for Theresa May’s government and for the majority of Brexit voters. Despite this, I think that it is worth analyzing the potential consequences of the United Kingdom actually leaving the EU and evaluating the possible scenarios that could result.

As Labour MEP Richard Corbett has stated, Brexit opens up a myriad of unknowns in multiple areas of concern. These include the legal field (such as the employment and pensions of Britons working in EU institutions), geographical concerns (free movement with Ireland, reactivation of the Scottish claim for independence), the economy (access to the common market and financial services, renegotiation of trade deals), immigration and free movement (restrictions on entering and leaving the United Kingdom and the EU, status of British citizens in the EU), and politics (reputation cost to international organizations, redefining relations with the EU). To this list we can add the equally important areas of law enforcement, armed forces, university education and research, and others. This range of issues gives us an idea of the magnitude and complexity of the changes that must be negotiated in the next two years and the real risk of increased tension between the parties directly impacted by them.

As we can see in graph 1, prior to Brexit the United Kingdom was no longer part of the Eurozone, the Schengen Area (it opted out in 1995), the Banking Union or the European Fiscal Compact; however, in some of these, such as the Schengen Area, it participated in political and judicial cooperation and in the fight against illegal drugs. In the case of the Banking Union, United Kingdom was also involved providing safeguards  to protect its financial system and sovereignty. 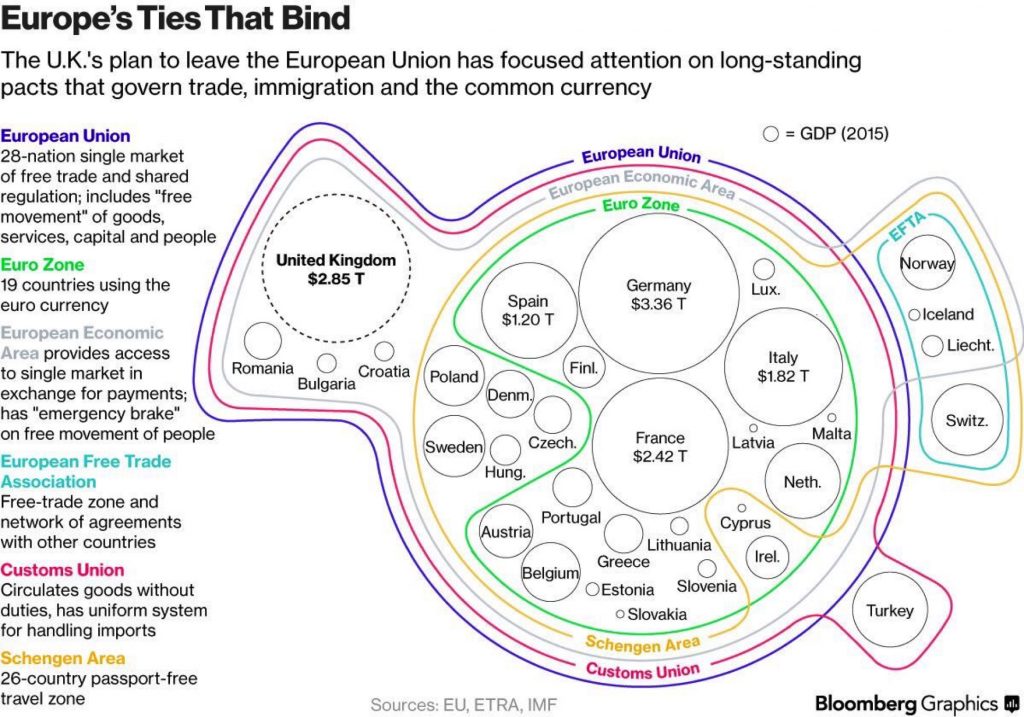 The United Kingdom’s largest commitment to the EU centered around three points: being a member of the European Union, the Economic Area and the Customs Union. The current question is whether Brexit will mean a complete renunciation of the commitments arising from these three major agreements or if, on the contrary, it will be possible to design a custom model for the UK, similar to agreements currently in place with countries such as Norway, Switzerland and Turkey, thus expanding the complex variable geometry that already exists. In graph 2 we can see the different integration options (total, partial or none) for the EU, as well as the current position held by the United Kingdom, the levels of market access that it would enjoy, as well as the requirements resulting from said access and the amount of exercisable influence it would have over the Union’s rules and regulations.

Any of the options considered or desired by any of the parties involved would be subject to long, hard negotiations. In the table below, I present four potential scenarios with two areas of focus: a) Willingness of the EU to take advantage of the UK’s withdrawal to deepen integration or, on the contrary, a trend towards greater disintegration; and b) starting exit negotiations either from a friendly or hostile position.

Apart from the scenarios laid out, there are other points and assessments that should be added here. First, with the exit of the UK, the EU is losing its second biggest economic power, representing 18% of its GDP, but it is also losing one of the world’s two financial hubs, the largest consumer market in the EU, the largest military force, a permanent member of the UN Security Council, an extensive and effective diplomatic network and a net contributor to the EU budget. As a result, the EU will lose geopolitical weight and importance in the world. The Asia-Pacific axis will grow even stronger and Western geostrategic unity will lose ground in Russia and China.

The European postwar ideal has been damaged. Fragmentation is no longer unthinkable. European integration is now reversible. Brexit creates a precedent, what we in the social sciences call a black swan event. In other words, what was once unthinkable is now possible.

The EU will also lose credibility (soft power). The VUCA world (volatile, uncertain, complex and ambiguous) is also moving into the EU, heightening the risk of a chain reaction and political contagion (especially in non-Eurozone countries). The rise of populism, nationalism, xenophobia, anti-Europeanism and anti-globalization could become even more evident.

The withdrawal of the UK will also shift the balance of power within EU institutions. It is possible that the bipolar vision and pressure, the Franco-German axis (with German predominance), could increase. This could lead to tension between countries that are integrated into the Eurozone and those that are not.

Lastly, the UK will no longer be the eyes and ears of the US for Europe. The US will redefine its transatlantic relations in economic, security and diplomatic terms and will seek new allies in the EU. It is possible that the UK will also be forced to redefine its role in NATO, which has been closely linked to the EU’s security system. 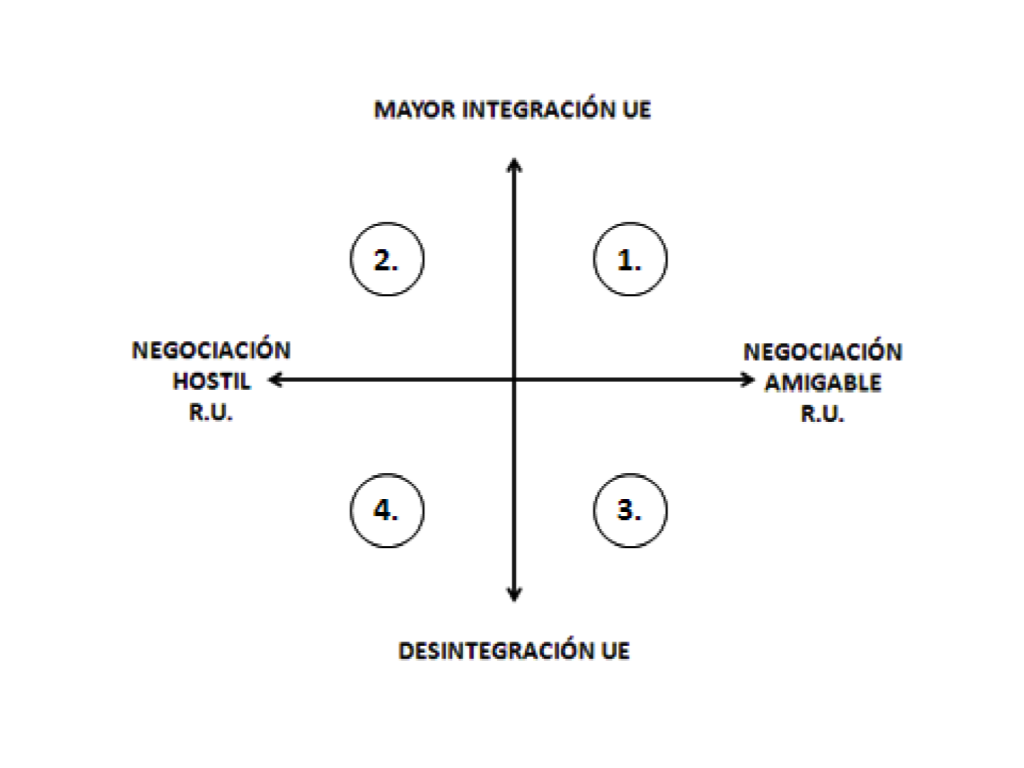